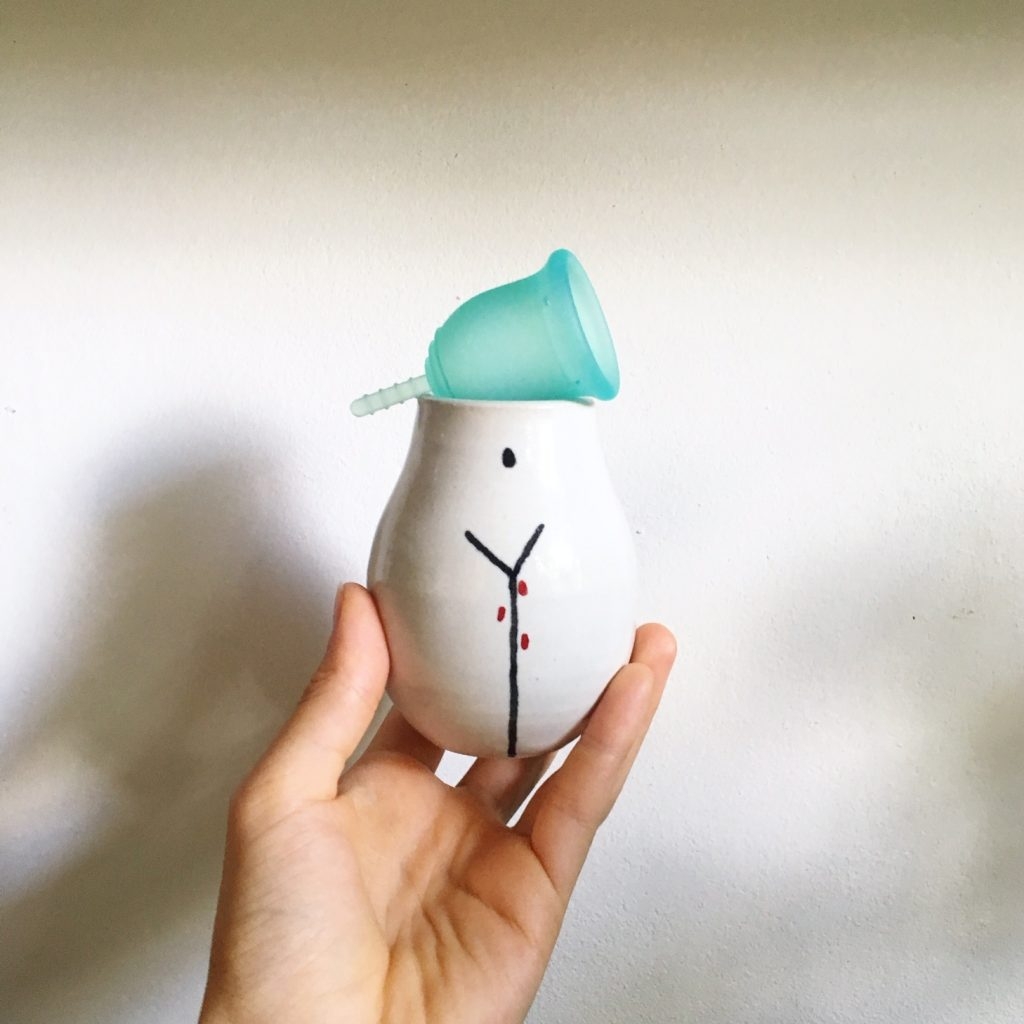 So I’ve been wanting to write blogs about specific cups for a while now. I’ve been using quite a few cups the past year, so I finally know a little more about the differences etc.
First up is the Lena cup! They were so kind to send me one of their small sized ones in a cute blue greenish color.

Vegan?
My main thing with cups is: are they vegan? And this is a little bit of a difficult issue with cups since they’re made of medical grade silicone and silicone, since it’s medical grade, has to be subjected to strict tests on.. yep, animals. The thing is that, once it’s been proclaimed safe, anything can be made of it without having to test it again. Still, there are still some companies that want to make changes in their material, adding some kind of color or glitter, so that it has to be tested again.
Some would say that silicone can never be vegan since it was once tested, for me the benefits of the menstrual cup (and I’m talking about waste reduction now) make the cup a much better alternative to tampons and pads (which are sometimes tested on animals as wel, here’s a PETA list with brands that are ok). So from here on I’ll use the term ‘vegan’ in combination with menstrual cups if they’re not re-tested on animals.

Lena
Lena is one of those brands that make vegan cups. I was following them on Instagram long before I tried their cup, because they’re just really cool. Their feed is not just about cups, it’s about intersectional feminism and politics as well sometimes. Their language is gender neutral (because remember: you don’t have to be a woman to have a cycle). And ok I just like the aesthetics (LET ME BE). Also, they tag the artworks they use properly (I kind of always judge accounts on that). So really, check out their feed. Makes me want to drool, so pretty.

The cup
So, they have 3 different kinds of cups. Small, large and one for people with a sensitive bladder. Their cups come in a few different colors, all come with a bag to keep your cup in. The small one they sent me is 25ml, like most small sized ones are. Overall the cup is quite firm, but in a soft way. There is not a lot of difference in firmness between the (thick) rim and the rest of the cup, which is nice and gets it to open up easier. As you can see it has a little bit of a tulip shape (hence their tulip logo I presume:-)).
Their cups have a flexible stem (which can be cut off) and some grip rings at the bottom to help you get it out.
I was too sleepy when I cut of the stem.. so I cut off the whole stem, instead of leaving a little to grab (I cut it off and then stood still for a moment as I realized what I’d done), luckily because of the nice grip rings it’s still fairly easy to take out.

I’ve had no leaks, and no problems whatsoever with the cup. I’ve been using it for about 6 months now.

Lena says their cup is voted #1 best beginners cup, and I can really see why. It’s firm so getting it to open inside will probably not be a problem. It’s not too firm so getting it in without it popping open halfway (ouch) will also not be happening. Because of the shape it is a tiny little bit shorter compared to the organicup, which is great for me since I have a medium to low cervix.

One last thing
Another thing I love is their extensive website, they have a LOT of information about everything cup-related you could think of probably. Also, I love it that they have this sentence in their user manual “Never attempt to trim the stem while wearing your cup.” I mean it’s hilarious and gives me the shudders at the same time. The idea :’)
Oh okay another last thing: Lena is a US based brand, which means shipping costs are quite high if you’re from Europe.. however, if you think of how much you’re gonna save on tampons and pads, in the end it’s still cheaper.